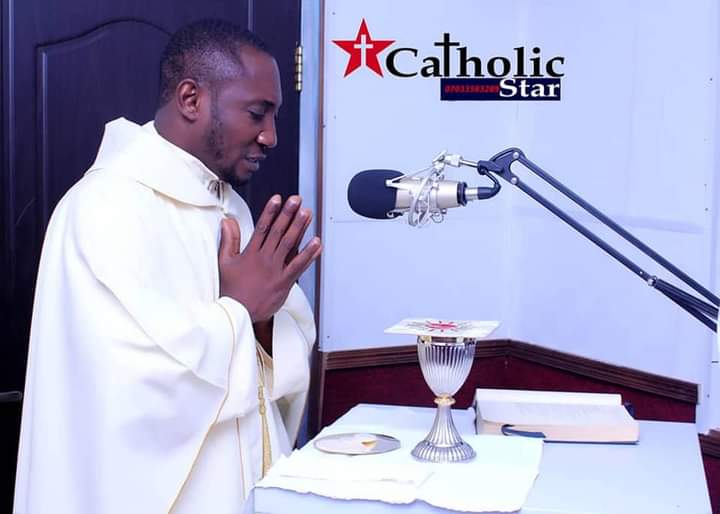 ACOLYTE: Usually a Seminarian who has received the highest of the minor orders, or a lay person who performs some or all of the same duties, which include assisting at Mass, taking Communion to the sick,  e.t.c

ALTAR: The table at which the Eucharist, the sacrifice of the Mass, is celebrated

AMBO: The place from which the Scripture readings are proclaimed and preaching takes place, and the Book of the Gospels is displayed. Various parts of the Mass are read by the cantor and certain announcements may be given from the ambo as well (sometimes called the pulpit)

ASPERGILLUM: A container or branch used to sprinkle holy water

BLESSED SACRAMENT: Bread and/or wine that have been consecrated and have become the body and blood of Jesus Christ

CANONIZATION: The solemn declaration by the Pope that a deceased member of the faithful may be proposed as a model and intercessor to the Christian faithful and venerated as a Saint on the basis of the fact that the person lived a life of heroic virtue or remained faithful to God through martyrdom.

CHALICE: The cup holding the wine that will be consecrated and become the blood of Jesus Christ

CIBORIUM: A container for the consecrated hosts, the Body of Jesus Christ

CHANCERY: The chancery is the diocesan office where the administration of a diocese is carried on and where records, documents, and proceedings of diocesan courts are kept.

CONGREGATION: Congregation is used in four distinct senses;
1. To mean a type of department in the Roman Curia
2. A type of religious institute, or
3. Some groups of Augustinian, Benedictine, and Cistercian houses, and
4. A gathering of the faithful in church.

DOXOLOGY: Words offering praise of God, e.g. the "Gloria", sung at the beginning of Mass, or the ending of the Lord's Prayer, "For the kingdom, the power and the glory are Yours, now and forever"

EPICLESIS: Words within a prayer that invite the presence and intervention of the Holy Spirit (e.g. "Father, send your Spirit upon these gifts to make them holy...")

ENCYCLICAL: A pastoral letter written by the Pope and sent to the whole Church and even to the whole world, to express Church teaching on some important matter.

HOLY SEE: This is the Episcopal jurisdiction of the Bishop of Rome (the Pope), and is the preeminent episcopal see of the world wide Catholic Church, forming the central government of the Church.

LECTOR: One who proclaims the Scripture readings during liturgical celebrations  (Alternately used as a term for one of the minor orders)

ORDO: An annual Church calendar, featuring instructions for each day's Mass and Liturgy of the Hours

ROMAN MISSAL: The liturgical book comprised mainly of the Sacramentary (prayers) and the Lectionary (scripture readings), approved by the local Bishop's conference and Rome.

SACRAMENTARY: The book from which the presider's prayers of the Mass and other services are taken

SACRISTAN : A person who cares for the Church (in particular the sacristy and its contents), prepares the altar for the Mass, etc.

SACRISTY: An area of the church where the chalices, ciboria, liturgical books, vestments and other accessories are stored, and where the clergy and other ministers prepare for the liturgy

SANCTUARY: The altar, ambo and presider's chair area of the Church; sometimes used more broadly to refer to the entire worship space

APOSTOLIC NUNCIO IN THE CATHOLIC CHURCH